tui is one of the most beautiful towns in Galicia. This city with an old town that falls on a steep slope to the Minho riverpossesses in addition to its beauty, one of the most famous cathedrals in Galicia. A quiet town, but at the same time animated by its people, tourism and the pilgrims who make the Camino de Santiago Portuguese. A relatively small destination but with a huge history behind it, which is present in its civil and religious architecture. In this post I will tell you about what to see in Tui, based on my time in the city. In my case doing one night in my itinerary on the way to Santiago de Compostela.

Tui (that’s how it is written in Galician), is a city that is part of the Pontevedra Province in the south of Galicia. It is exactly on the banks of the river Miño, which forms the border with Portugal. On the other side of the river is the Portuguese city of Valencia do Minho. Both cities are linked by two bridges and make up a Eurocity. In the blog I also tell about my visit to Valença and its incredible fortification as part of what was my route through Portugal.

The importance of Tui in history.

To understand the importance of Tui, it is necessary to observe the richness of the valley, with natural conditions suitable for human survival that have been recorded in the area since at least the Paleolithic period. However, stable populations appear only from the 7th century BC (remains of various forts and even extensive walls are preserved in the area). I am only going to summarize that the Romans later passed through Tui, and with the fall of the Empire it was consolidated as a city of episcopal weight.

In later centuries it became the provincial capital during the old Kingdom of Galicia, for its strategic and commercial value across the river. In the year 1225 the imposing St. Mary’s Cathedral which today is the great protagonist of the old town, built in the Romanesque style with later modifications.

Today Tui is a destination that bets on tourism, and is a recurring starting point for many of the pilgrims who decide to do the Portuguese Way.

Where to stay in Tui

Tui is a city with an important offer of accommodation thanks to the fact that it is a tourist destination due to its historical importance and heritage, as well as being a city that is part of the Camino de Santiago Portuguese. There is an important offer of accommodation with more than 40 establishments. These are some that I recommend considering for their good reputation and value for money:

Stay at the Tui hostel.

This parador-style hotel operates in a typical Galician manor house. All surrounded by a more natural environment a step away from Tui and on the banks of the Miño river connected to the river promenade. The hotel has a family atmosphere, and has restaurants in the hotel itself.

Staying in a house-style.

This hotel is also on the banks of the Miño river and very close to Paseo de la Corredera where most of the restaurants in Tui are located.

Check prices at Hotel A Torre do Xudeu

Stay at home (in apartments)

This accommodation offers apartments in a more modern-style building, with a garden, terrace, barbecue area and views of the mountains.

Stay in an excellent location in a 3-star hostel.

La Sigrina is a hostel located in an excellent way, with a very good relation of price and quality. Some of its rooms include views of the garden, something that we can also request when booking.

Check prices at the Sigrina Hostal

What to see in Tui Galicia

Tui is a town that you can get to know in the same day, but you can also enjoy the place in a more relaxed way by spending the night to have time to explore the surroundings. In my opinion, these are the must-see activities in Tui for one or more days:

Tour the old town of Tui

The best way to start getting to know Tui is to take a walk through its old town, which is not that big, but some of its streets have steep slopes. Tui has a display of important medieval architecture in its streets. At the top is the Cathedralwhich has the largest medieval cloister among those preserved in Galicia. They will tell you about this and more if you do the free free tour of Tui (actually it is with the system to the cap). Along the way you will also find cruceiros, the Chapel of Mercya tunnel with beautiful views of both the city and the valley, or the beautiful Saint Elmo’s Chapel, which is a perfect example of Portuguese Baroque in Galicia. 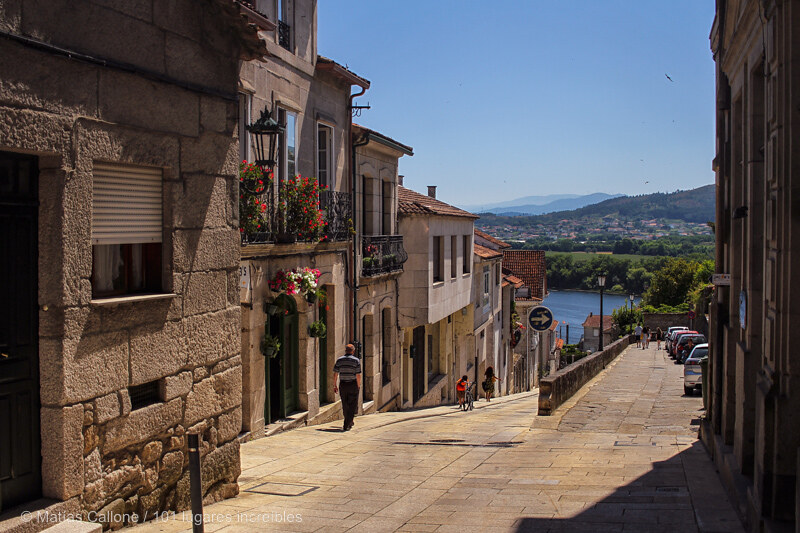 The Sephardic legacy of Tui is also important in his old jewish quarterwhich integrates the network of Jewish quarters in Spain. There is also a free guided tour of the jewish quarter where they will take you to see the Casa dos Capelans or the old apothecary, and houses related to the Jewish culture of that time. 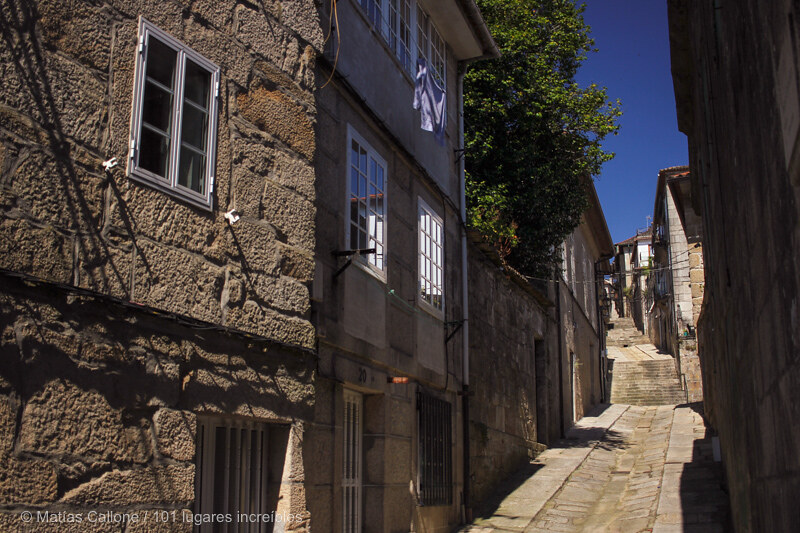 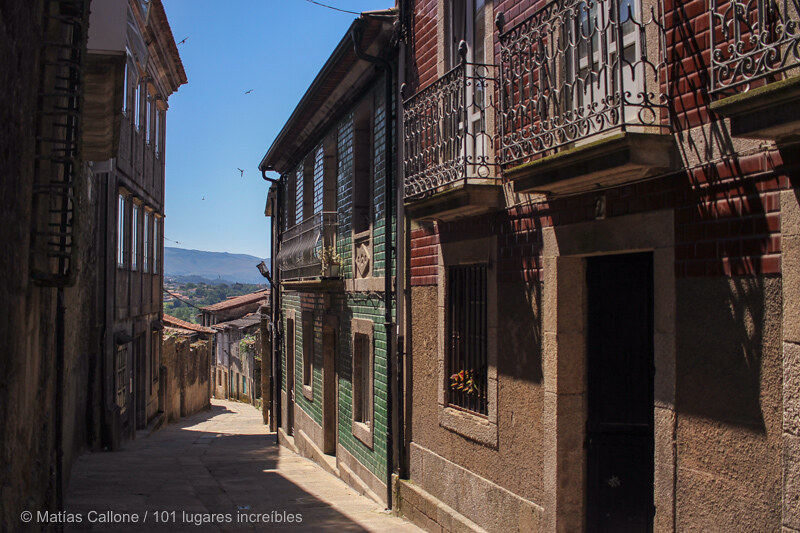 Imposing, with notable architectural and artistic details, this is the Cathedral of Saint Mary of Tui, which from the outside looks more like a fortress with its defensive towers. It is the episcopal seat together with the co-cathedral of Vigo since 1959. And it will be very easy to find it since it is in the highest part of the city, dominating all the views. The Cathedral was built and completed in the year 1180 in full Romanesque. Hence its small and minimal openings and its defensive structure. Later, in numerous reforms, Gothic elements were added, especially visible in its portico or in the 13th century cloister, one of the largest and best preserved in Galicia.​ 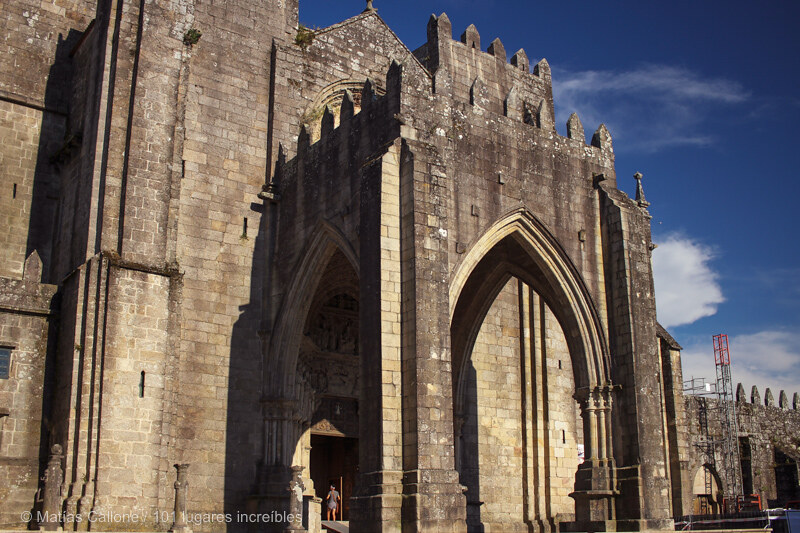 The Gothic portal is one of its jewels, it stands out for being considered the first Gothic sculptural complex in the entire Iberian Peninsula. In his statues we can recognize prophets, as well as kings and queens who contributed to the construction of the cathedral. 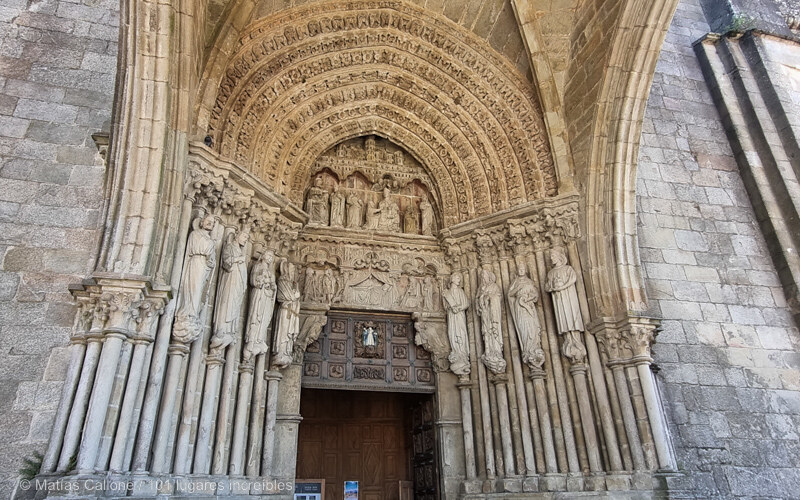 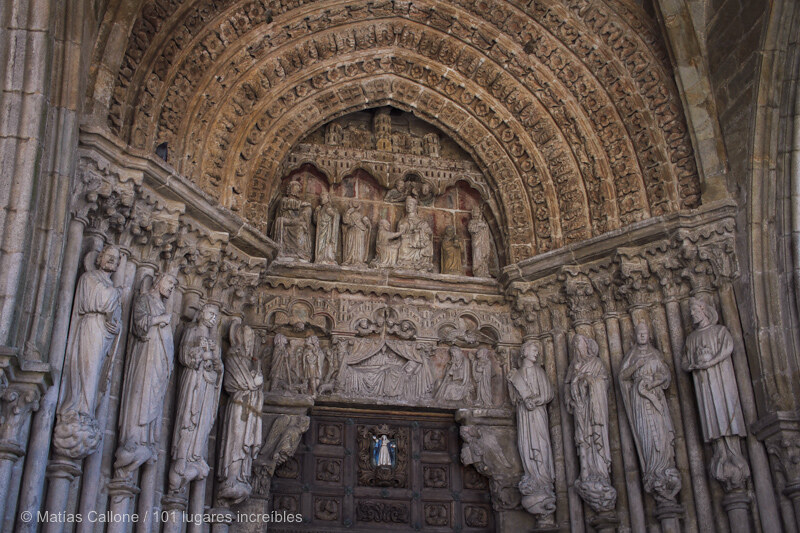 EITHER Paseo da Corredoira, is the liveliest street in Tui, a pedestrian area at the top of the city and very close to the Cathedral. It is a somewhat more modern part with noble buildings full of history and with the Galician style: covered with stones and with beautiful balconies. It has an area of ​​gardens, bars and restaurants with terraces to watch life go by. At one of its ends there is a panoramic viewpoint to the valley, the countryside and the Miño river. 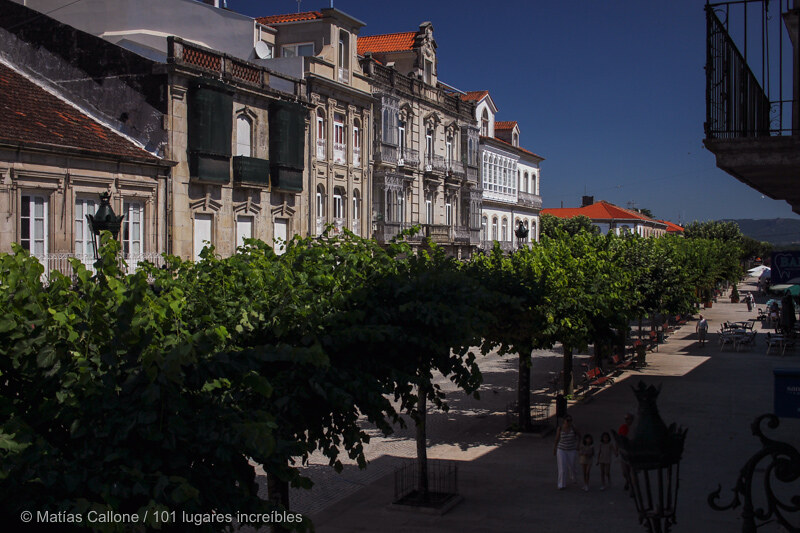 Precisely at one end of the promenade is the work of the sculptor John Oliveirawhich you will soon identify by its striking size, size and beauty.

tui It had imposing walls, as is to be expected in a medieval city with so much historical weight and so much to protect. Those walls were disappearing. Today there is a beautiful walk in one of its sections: the Troncoso Gardens. It is a brief and beautiful route, which at one end has a beautiful ornamental fountain. All next to an old convent where today there is a hostel for pilgrims on the way.

Enjoy the walk along the river

In recent years, a landscaped river promenade that begins at the Marina beach and extends to the Penedo Park. This was the space between the wall and the banks of the Miño. Today it is a place with green, shade in summer, and that invites recreation. 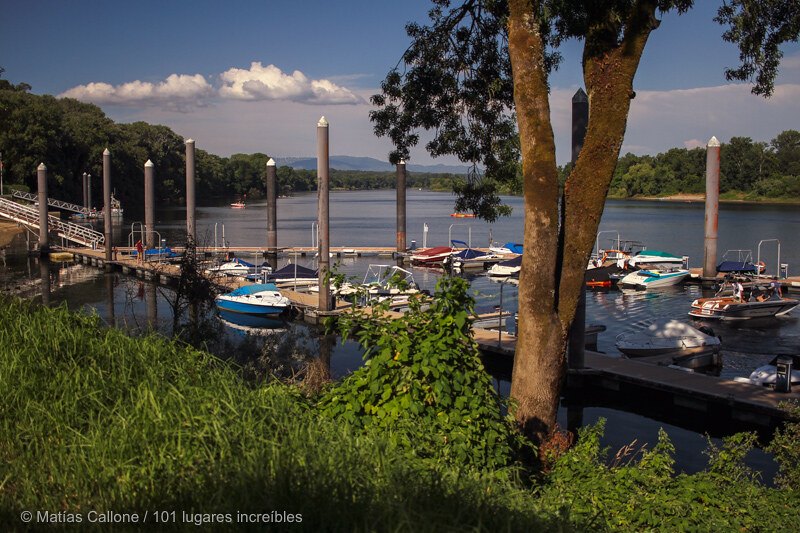 Although a bit further from the old town, this river beach is the place to enjoy the river and nature just a step away from Tui. It’s only five minutes by car, or a little more walking. It has a landscaped sector, with picnic tables.

And once we have explored the town of Tui, it will be time to cross the Tui International Bridgedesigned by engineer Pelayo Mancebo. You can cross it on foot and reach Valença do Minho in Portugal, a city with which it is twinned. In the photo you can see Tui from the coast of Valença in Portugal: 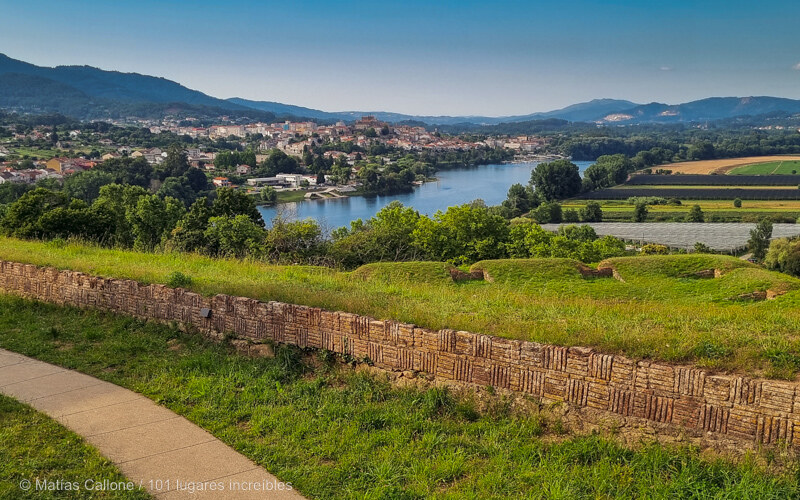 In the surroundings of Tui is the Galiñeiro mountain rangeand among them is the Mount of Aloia, a natural park with 746 hectares and trails to explore. There you will get to know the typical nature of this region in one of the protected natural spaces of Galicia. Inside the park are the historic tripes millswhich you can discover by following a path for cars for almost 3 kilometers.

And up to here my recommendations, they will tell me what should be added. Tui was my recent gateway to Spain following the Camino de Santiago from Portugal. 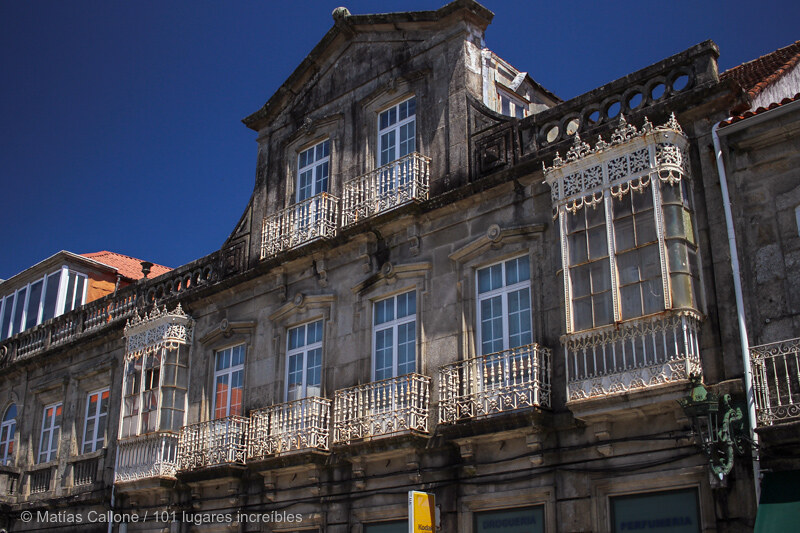 Then they would continue touring Galicia for several weeks, but that is a topic for several posts that you will already find on the blog from the internal search engine 🙂