I am going to share the details of my 15-day itinerary touring Portugal departing from Lisbon and heading north, just as I did my recent travel itinerary. In this post you will find details of the route, ideal to do by car, or even combining train and bus (if you do not have a car), as well as the map and my recommendations. This itinerary will take you through the three largest and most important cities in Portugal including Lisbon itself, Porto and Braga, as well as numerous world heritage sites, beautiful towns, and landscapes that reflect the very essence of Portugal.

Reasons to do this route by car through Portugal

This route itinerary through Portugal has a special value for me. It was my first trip after a long time without traveling. And it was a perfect trip to reconnect with my passion for travel. Basically because this route and the destination itself (Portugal) more than met my expectations until they were exceeded. Portugal was able to connect with me quickly as I went mile by mile. And as the days passed I was able to pass through a variety of attractive points that gave me a complete, varied and amazing panorama of Portugal.

The itinerary includes big citiesit’s like your own Lisbonand the magic Portobut also tourist cities on the coast and with beaches such as Aveirolovely little old towns (like Guimaraes either bridge of lima), and meanwhile a number of World Heritage Sites, both in cities and coimbralike their surroundings.

I think this route, from Lisbon towards the north of the country, it is a perfect plan of Portugal in its essence addressing its cities, towns, landscapes, culture and gastronomy. A travel itinerary going through its history, in famous places and even in lesser-known destinations but which will end up in the best of cases making us fall in love with the country, its kindness and its people. In this post, in addition to the map and details, I will leave below the descriptions and links to all the destinations that I propose to visit with their recommendations.

Itinerary of the route by car through Portugal

The route, starting from Lisbon, is as follows:

The total route that I propose starting from Lisbon and ending in Valença on the border with Galicia (Spain) is 501km by car. This is a total of 6 hours of continuous driving. Of course, that this section that we could do even in less than a day, we are going to extend and dose it in about 10 or 15 days ideals. I suggest these times and number of days to enjoy what I call an ideal pace, without speeding up, and enjoying each place. In any case, the itinerary and times can be adapted and modified to taste. Below I detail my suggestions for the number of nights in each place.

Map of the route by car through Portugal

On this map you will find the route diagrammed with the route and each city that I suggest visiting.

Reasons to visit each city and town on the route

Each point of the route has a reason to integrate this itinerary. I leave the details for each one, and at the end, a series of suggestions that can also be added to the itinerary.

I don’t think I need more introduction Lisbon. The capital of Portugal, the starting point for this route proposal, is famous for its trams, its uneven streets, its color and, of course, its enormous heritage. Of course, if you come to Lisbon to explore the city, it will not be necessary to pick up a rental car on the first day, since in cities like Lisbon, it will be better to use public transport until the day our roadtrip really begins. Although my trip through Portugal began in Lisbon, the guide and the detail of recommendations for Lisbon will remain pending since my journey begins when I arrive at the airport, in the direction of coimbra. In any case, I suggest that from Lisbon you try to get to know Sintrawhich is one step away from Lisbon. The suggested in this case is to spend three or four nights in Lisbon. (Suggested time in Lisbon, three nights)

coimbra and his university

coimbra Like almost every city in Portugal, it has a long history dating back to Roman times. But the importance of Coimbra is above all when it becomes the center of the Kingdom of Portugal between the years 1131 to 1255. In those years many buildings were erected that are still preserved as authentic treasures of the city. Also in Coimbra the first Portuguese University, which as if that were not enough is one of the oldest in Europe and the oldest in Portuguese culture. One of the greatest charms is the medieval old town, on a hill overlooking the Mondego River. In our passage through this city we will be able to see the incredible Joanina Library of Coimbra, in a set declared as a World Heritage Site. (Suggested time in Coimbra, one night)

See more about Coimbra on the blog

Aveiro and their channels

Aveiro It is one of the most beautiful cities on this route due to its singularity with the canals, and especially the postcard of its boats called moliceiros where you can take a walk. But in addition to incredible images, Aveiro offers modernist gems, museums, lively squares at all hours, and housing developments next to huge beaches bathed by the noisy waves of the Atlantic. (Suggested time to stay in Aveiro, a night or two in summer if we want to add beach)

Porto and its suburban charm

It is the turn of one of the strong points of the route: Porto It is one of the most revered cities in Portugal for its fame, heritage and charm. Lively like few others, especially in the Ribeira area, which is the historic heart, and the area that concentrates buildings declared as World Heritage. Not to mention its views of the Duero, the atmosphere of the restaurants with their terraces and the views of the imposing Louis I bridge. Or of its corners that amaze like the Lello bookstoreor their tiled churches. (Suggested minimum time to stay in Porto, two nights) 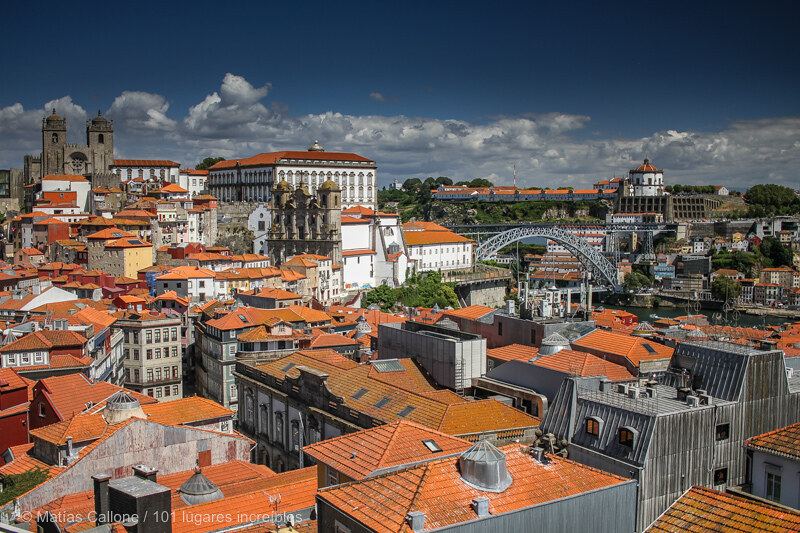 from the big city of Porto we jumped to a much smaller city, with the charm of arriving at one of the most picturesque places in Portugal. barely upon reaching Guimaraes you will find a part of the tower and wall with the legend “Portugal was born here”. It is that in this place events happened that marked the conformation of Portugal as a country (or rather as a kingdom in a long beginning). Guimaraes has something special and it is one of the most beautiful villages in Portugal. It is classified as World Heritage for the value of its old town and is undoubtedly one of the must-see points on the route. (Suggested time to stay in Guimarâes, one night) 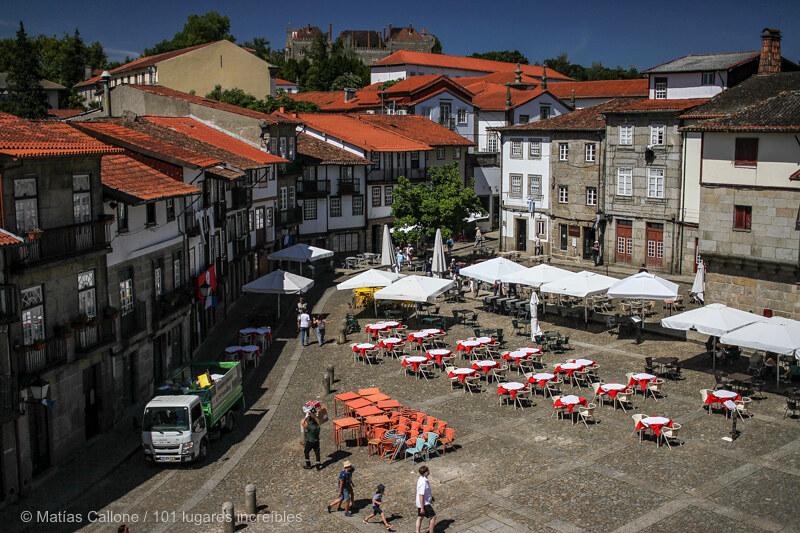 Braga is the third largest city in Portugal after Lisbon and Porto. Perhaps because it is a little further north, it is a great underestimate. Of course, Braga does not have the size or the monumental scale of Porto (and always comparisons are hateful). Starting from that point, braga It has a great history behind it, including its Roman stage in which it was called Bracara Augusta. braga It is a city with a lot of energy due to its university atmosphere, with a historic center to walk around. There are numerous museums, and it is also one of the cultural centers of the country. Once you tour the city, it is inevitable to know the Sanctuary of Bon Jesún do Monte, one of its most incredible and recognized sites with its staircases. (Suggested time to stay in Braga, one night) 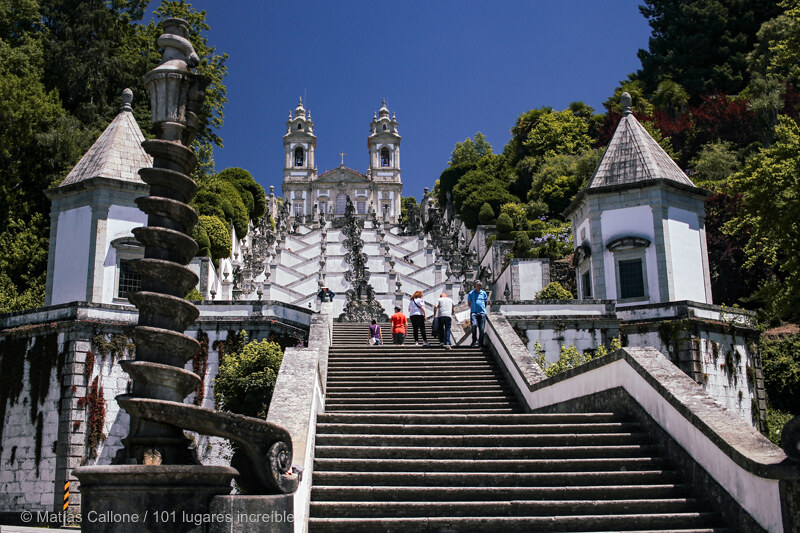 The quiet beauty of bridge of lima

Once again we went from a city with all the letters like Braga, to a smaller one that is also one of the oldest in Portugal. It is part of Camino de Santiago portuguese, and its most famous postcard is an ancient Roman bridge. Its streets and its traditional architecture, are arranged facing the Lima River with walks and paths along the banks. (Suggested time to stay in Ponte de Lima, one night) 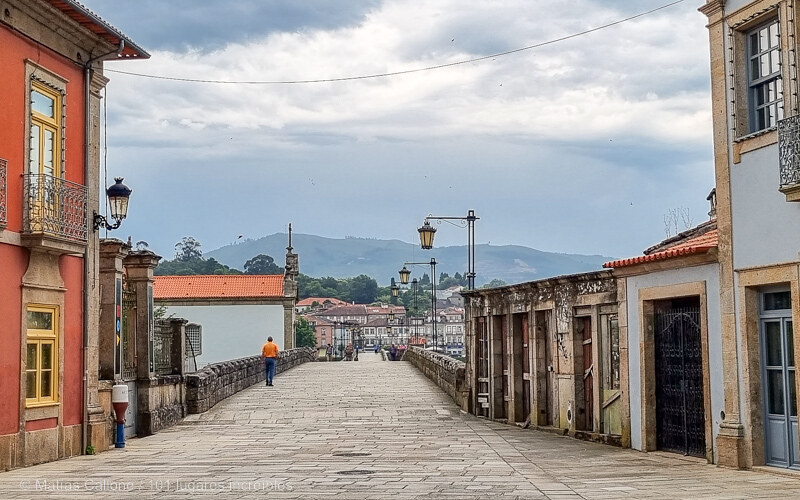 The strength of Valencia

Towards the end of the route by car through Portugal we will reach Valença, and it can be said, in the northern limit. It is known as Valença do Minho, and it is a neighboring city with Tuy in Galicia. Separated by the Minho River, both cities almost seem to look at each other from the slopes of the river. Valença is fortified with its imposing walls. In fact, it is the largest fortress in Alto Miño with a walled perimeter of 5 kilometers. Within those walls is the old part of the city, which today is completely touristy, with shops, restaurants and cafes. (Suggested time to stay in Valença, one night)

More ideas to add to the route by car

Valença is a golden brooch to close this unforgettable route through Portugal that undoubtedly had everything. And of course, much more can be added if we have more travel time. Although I could not visit them, I recommend paying attention to these suggestions that were saved as pending on the map. For example, near Coimbra is the Buzaco Forestand on the way to Aveiro is the town of Agueda. On the way to Porto from Aveiro, you are the Church of Santa Marinha de Cortegaça, famous for its tile art. Not so far from Guimarães is the town of Amarante, and almost equidistant with bridge of lima or with braga there is the Peneda-Gerês National Park.

Finally, we must not forget that once in Valença, we will be at the gates of Galicia. In fact, after my route through Portugal, my trip would continue through Galicia, a long six weeks. But that is a topic for another post.