Besalu It is one of the most beautiful towns what to see in Catalonia and Spain. It is a medieval town preserved in an amazing way, and from the bank facing the Fluviá River, it generates a panoramic view that is difficult to match.

. It is a finishing touch for a four-day trip that I am going to share with you in detail. And a great idea to “escape” from Barcelona ready to shade ourselves with the towns and landscapes that unfold as soon as we leave the urban area.

Reasons to visit Besalu Besalu It is one of those destinations that is difficult to go wrong in a photo: it shines from every angle. What we see today is not exactly what its medieval appearance was like. There are some changes and transformations throughout the centuries (something difficult to avoid of course). However, much of this aspect can be intuited through buildings that stand out among the group: especially the bridge, churches, the archaeological remains of the old Jewish baths, its squares, remains of walls. All this set completes a picture that today looks monumental and is projected as a tourist magnet. It is in fact one of the towns with a medieval imprintmost beautiful to see in Catalonia and throughout the Iberian Peninsula

Besalú is mentioned in countless writings, stories throughout the centuries. It is also the scene of movie scenes, advertisements or as a simple but powerful regional postcard. To add reasons, Besalú has been declared a National Historic-Artistic Site since 1966. 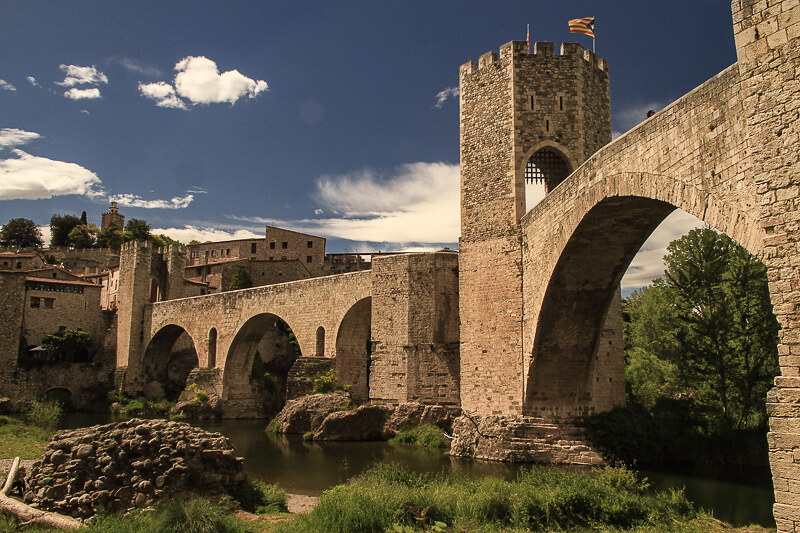 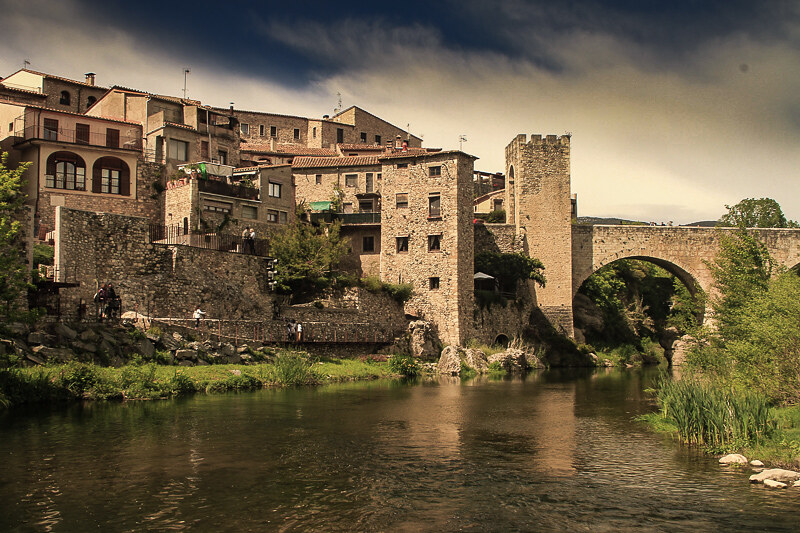 How to get to Besalu. Besalu is in the province ofGirona and in theRegion of La Garrotxa

. This is near the Pyrenees and France, located at 150 meters of altitude. There is no difficulty in getting there, since it is a well-connected town by road. For those who want to arrive by public transport, it is a little more limited, with combinations since there is no direct service, and something limited with the schedules. Undoubtedly the most practical is the car. The Distance from Barcelona to Besalu 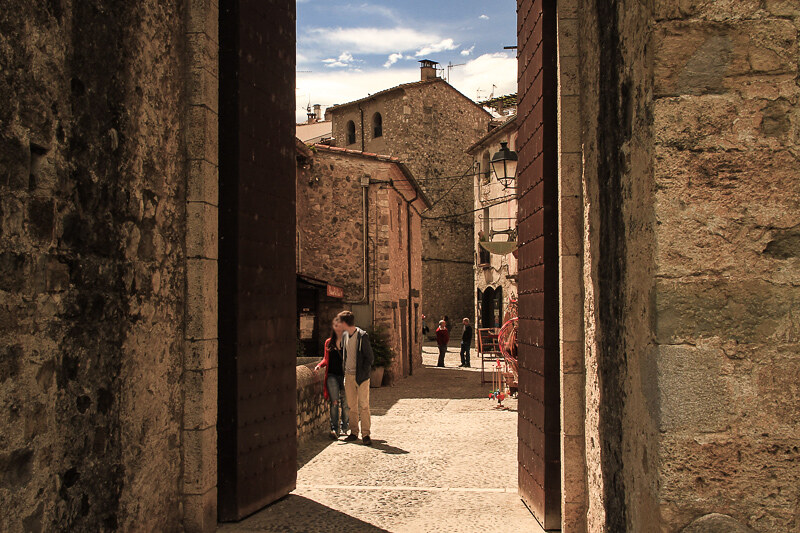 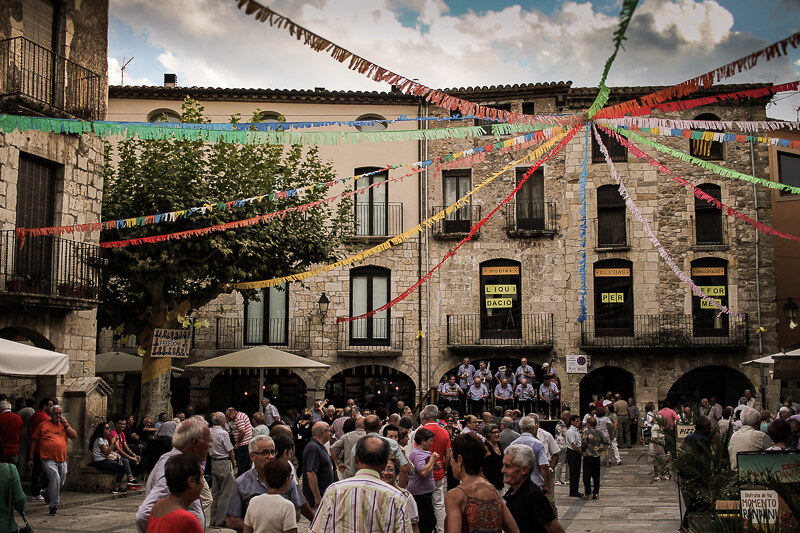 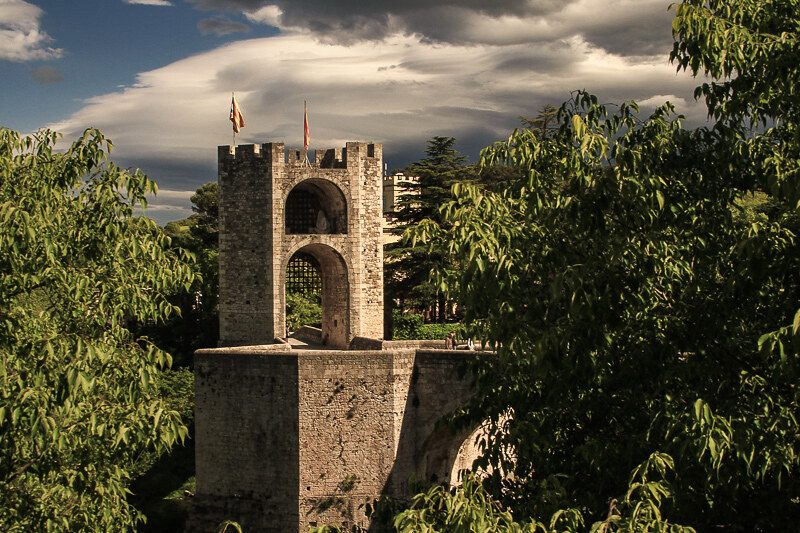 What to see in Besalu. your bridgeRomanesque

. Although it is not necessary to mention it to be included in your visit, the pedestrian bridge of Besalu 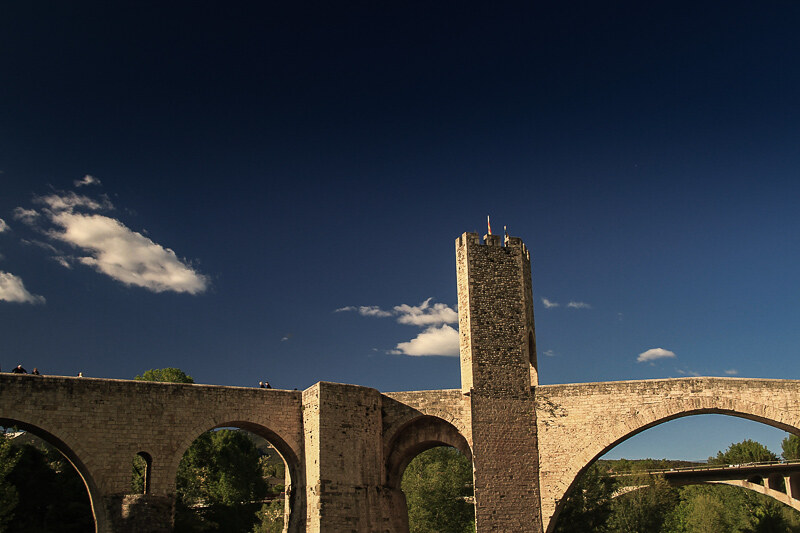 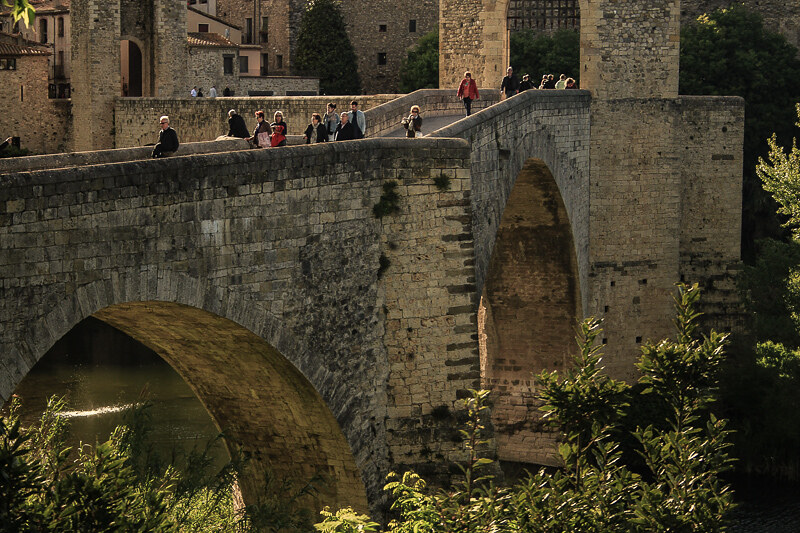 This monumental bridge has been mentioned since the 11th century, and was rebuilt several times both due to natural damage and human conflicts (the last major incident was after the Spanish Civil War when part of the bridge was blown up). 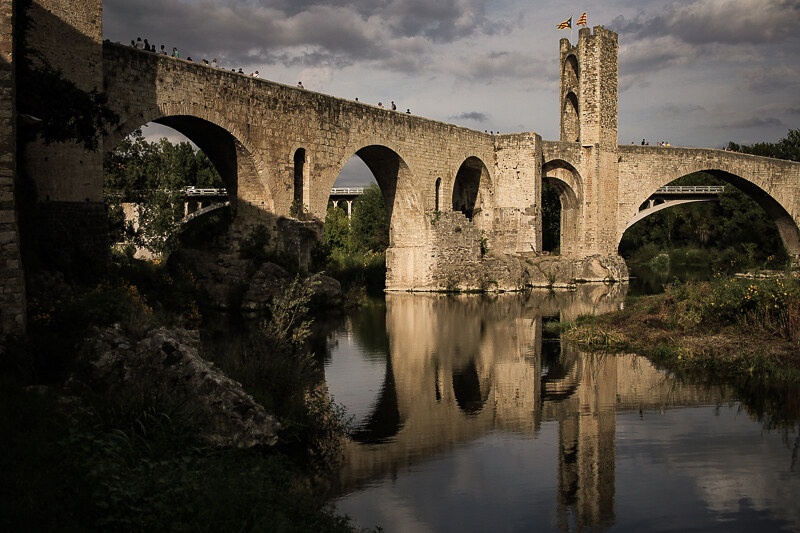 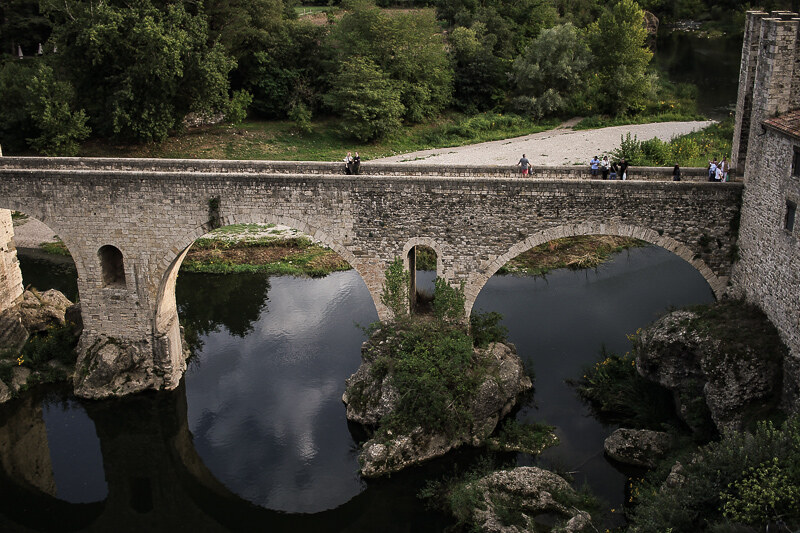 Within Besalú and as in so many ancient towns and cities in present-day Spain, there was a Jewish quarter (until they were expelled in 1435). From that legacy and culture, for example, the archaeological remains of the Jewish baths were recovered. And it is known that there was a synagogue of which only a few remains remain. The baths (miqve) were rediscovered very recently (in 1964) in an excavation, and they are an authentic archaeological treasure that can be seen next to the Fluviá river on one side of the town.

The church of the Monastery of San Pedro de Besalú and San Juliá. 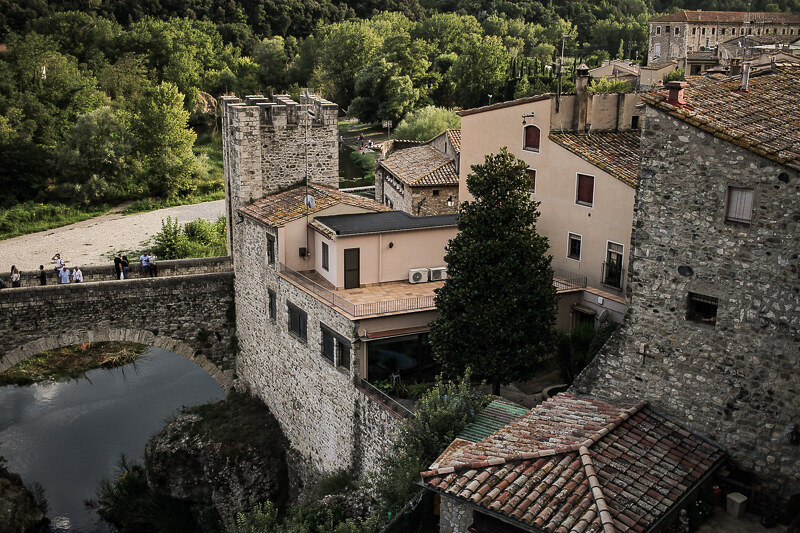 Part of the heritage inventory of Catalonia, this house is an example of Romanesque civil architecture among the best preserved from the medieval period. In Wikipedia there is an entry with information about this house. (in Catalan)Church of Saint Vincent 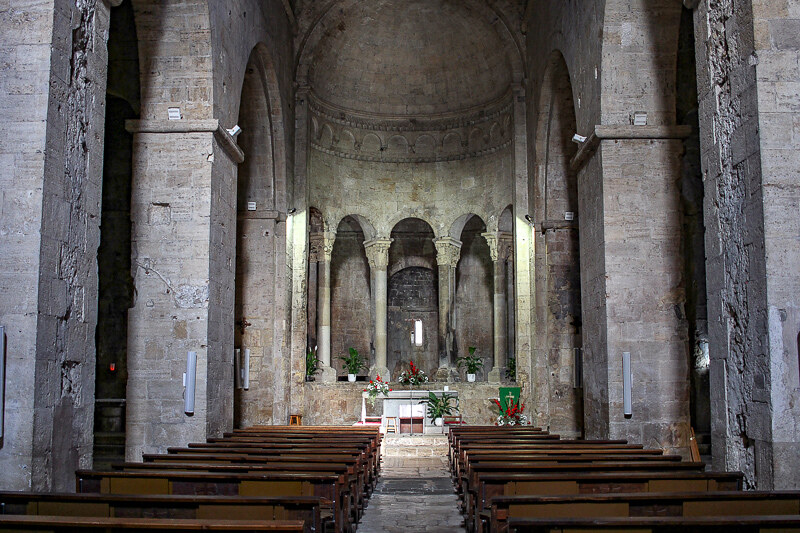 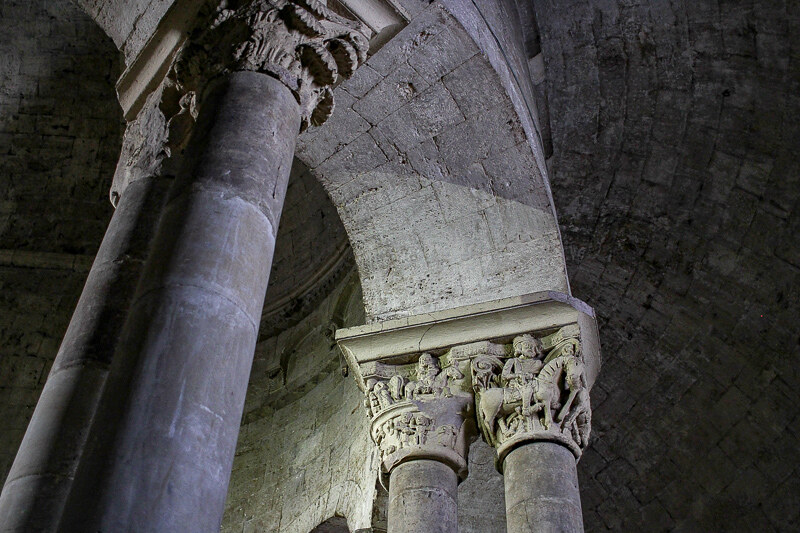 How long to visit Besalú. The town of Besalú can be covered extensively in a morning or an afternoon, since it is not too big. It has all the services, various restaurants, cafes and shops that open especially on weekends. Not far away are towns likeSanta Pau

another lesser-known beautiful medieval quarter (and much quieter even on weekends).

Besalú, in conclusion, has enough merit to become the goal and end point of a route full of charm. Although of course you can also continue towards Cadaqués, the Costa Brava, or towns such as Castelló de Empuries towards the coast. Or even continue exploring the entire area of ​​La Garrotxa, which with its extinct volcanoes, foliage, mountains, small rivers, waterfalls and trails, is one of the most beautiful nature spots in Catalonia.

In road trips through Catalonia, it is not about thinking how many days are enough, but how many days we could extend to add more and more ideas that are so worth including in an itinerary. The options are many and multiply kilometer by kilometer.

All images belong to Matías Callone / (**) The visit to Besalú and the route were drawn up as part of a trip through charming towns from Barcelona to Besalú organized by the Catalan Tourism AgencyYou might also be interested in:

And among the most beautiful villages in France, Yvoire (French Alps)

6 museums in Europe with virtual tours

A beach in red in Santorini, Greece

A glass passage hanging on the mountain, in China

4 wonderful churches in Ávila that you must visit